An Overview of 112 Degrees with Ken Hobson 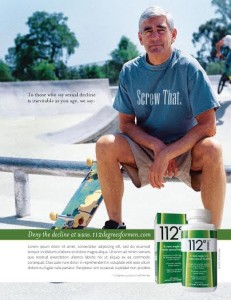 On Getting Social with Miriam, I was excited to interview a guest that I would have thought at one time would not have been a fit for my show. However, after interviewing some guests who focused on women’s health- since plenty of my listeners are male entrepreneurs, I decided to have Ken Hobson, the founder of LIFE SPAN to speak about men’s sexual health. Sure, it may seem taboo, if you will. However, I really don’t see how it is. It is very important that information about men’s health is spread out as much as possible and I am happy that I had an opportunity to do so today.

LIFE SPAN labs founders Rod Tallman and Ken Hobson created a company devoted to men’s sexual health. After nearly five years in business, they remain surprised, and excited by where a good product can take you if you follow it.
Dig a bit deeper and perhaps the outcome is not quite so surprising. Both Tallman and Hobson occupy the target demographic for such products: healthy, sexually active men in their mid-50s. Both had tested the drug Viagra and certain supposedly all-natural products. And both had been disappointed by the side effects or ineffectiveness of those products.

The two men met in 2003 through their work with Committed Partners for Youth, an at-risk youth mentoring organization. Tallman had recently left Nike after nearly 20 years in sales and marketing, where he led Nike Golf from a $30 million to a $200 million business. Hobson’s background was in mergers and acquisitions, growing and selling businesses.

So both men knew their way around a business plan. But developing a men’s sexual health supplement based on sound science and safety, and seeking to use that product to help redefine a cluttered and none-too-respectable nutraceutical market segment? That, they agree, can only be credited to serendipity.

It all began in March 2005 when Tallman received a call from a friend and former colleague in Sweden. The friend explained that he’d been approached by a group that claimed to have an all-natural version of Viagra, and might he be interested in helping market and distribute the product in the U.S.

Tallman knew that if the product proved to be what it was claimed to be, it could be a great help to men and likely be very successful. He also couldn’t help but recall his own unsatisfying experiences with such products. He agreed to take it on, and soon invited Hobson to join the effort.

For the next few months, the two men feverishly researched the market and the product. They even took the supplement themselves, and were encouraged to find that it worked. Then, just as things appeared to be taking off, a purity study revealed that the formula was, in fact, somewhat less than all natural: It was spiked with pharmaceutical ingredients.

Having agreed that they would only proceed with an all-natural product that they could fully support, the two elected to bow out of the project. It appeared their foray into the world of men’s sexual health had come to an end. As it happens, it was just now beginning.

After doing plenty of research and conducting studies, things were definitely taking off. In April 2006, Dave Edwards, a mutual friend and fellow Nike veteran, joined the group, bringing his considerable production and international business experience to the team, and LIFE SPAN labs was born.

Today, LIFE SPAN labs is attempting to do nothing less than redefine the market by promoting a safe, truly natural, whole-body approach to men’s sexual health.

One need only consider the route taken by 112 Degrees. The all-natural supplement underwent such rigorous preclinical testing. By requiring sound science and safety, LIFE SPAN labs is building trust with its customers. They are inspiring them to view their sexual health not just as something to be addressed moments before sex, but
as an important component of maintaining peak overall health over a lifetime.

Here is the podcast with Ken Hobson.