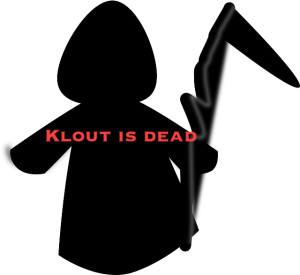 You are probably wondering why I am saying that Klout is dead considering their site is still up, and there are still scores. The fact of the matter is, due to that they unsuccessfully had been able to award an accurate score to someone truly influential online as well as offline- Klout is meaningless.

I understand that those who still support Klout only do so for the sake of accountability reasons. Sure, if you want to keep a strong social media presence going, you do need to make sure you are sharing good quality content as well as engaging with those in your networks on a consistent basis. In all honesty, you don’t need Klout for that. There are other ways you can make sure you are sharing good content on a regular basis and engaging with those who engage with you. You can set a schedule to share posts, and schedule a time to engage with your networks. If you are consistent, you will keep a strong social media presence.

The fact that Klout had purposely manipulated scores, and that the scores got to people’s heads so much to the point that they did anything they could to game the system shows you that Klout was/is nothing but a game. For instance, I don’t have a problem with tagging people on Facebook. If you want a number of people to see what you have to put out, that is the only way to get their attention. However, many people only excessively tagged for the sake of inflating their scores. That is not even creating a legitimate social media presence.

It was one thing when having a high score meant being eligible to win some perks, which no one can do anymore since the program has been discontinued. At one time if you had a high Klout score, you would be able to get better customer service. Today, no one cares.

I believed at one time Klout did have potential to actually do more than it did such as finding a way to be truly accurate with measuring real influence. That is why I supported it and had even written ebooks, and created courses about the importance of Klout. Don’t get me wrong. I don’t regret supporting Klout when I did. I learned a lot about social media by doing that.

However, you rarely see new articles written today supporting Klout. In fact you rarely see any articles that have been written up about Klout over the last 6 months. This article talking about its demise may be one of the very few you will see about Klout. Hootsuite also recently removed Klout from their system.

Klout had a great concept and it did have the potential to do well. However, it is too late now. I also believe (I am not saying this as a fact, more as a feeling and I may be completely wrong here), former CEO Joe Fernandez left Klout because he saw a sinking ship and wanted to flee before it sank. Perhaps one day there will be a much better system that will use the concept Klout did have without being purposely mysterious with their calculations.

There have been employers in the past who only cared about the candidate’s Klout score instead of experience. In all honesty, I would avoid those employers like the plague and look for employers who are looking for experience and past schooling instead of Klout scores. Klout is no longer important, in fact it’s dead.