Lithium Technologies is Taking Klout to the Next Level 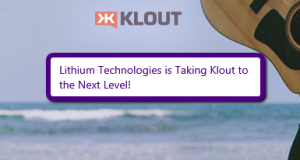 As you are aware, Lithium Technologies acquired Klout nearly 2 months ago. At the time, no one had a clue what Lithium’s plans were going to be. However, today the news is starting to spread about the changes that are being brought to Klout due to the acquisition. As for now, there are two different ways Klout will be changing.

First off, Lithium will be supporting “popup communities”. Rewards can be earned by Klout influencers by participating in the perks program. For example, if a major pet food company is creating new dog treats- the company will want a lot of buzz created for launching this new product. What will happen is that influencers who are relevant (obviously dog lovers would fit into this category) will be invited to try out the product, and share images and commentary.  Therefore in this case, influencers would be sharing pictures of their happy pooches while raving about how much their dogs loved the treats across their social networks. That certainly would be creating the desired level of buzz. This actually may make Lithium more relevant to certain types of businesses that would be considered to be more campaign-oriented, such as entertainment and consumer good companies.

The other way that Lithium will change things around for Klout is that later this year, products will be scored. Not for the sake of “influence”, however for quality. The objective is to turn the Klout score products into the definitive measure that would show the quality of the product based on consumer ratings.

I am expecting Klout to keep evolving, and in time Lithium will likely have some great new plans. By the way, the Klout Android app is finally here.