Be Still My Bleating Heart

Clark the Cub (Photo from csnchicago.com)

After nearly 80 years, the Cubs missed the perfect opportunity to break the curse.

As you may recall, the Cubs were cursed in 1945 during the World Series following a heinous act toward a goat.

Billy Sianis routinely brought his goat, Murphy, to the games. 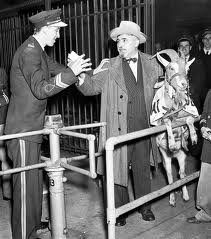 Billy and Murphy (Photo from billygoattavern.com)

When he was asked to remove Murphy because his odor was bothering other fans, Billy cursed the Cubs. Billy declared “Dem Cubs, dey ain’t gonna win no more”.

The only way to break the curse is for the Cubs to willingly invite a goat to a game (not just for publicity).

The Cubs should have taken this opportunity to break the curse by introducing a goat as the new mascot.

Although it’s been a while, mascots aren’t new to the Cubs. In 1908, the Cubs tried a bear that looked strangely like a scary giant rat. 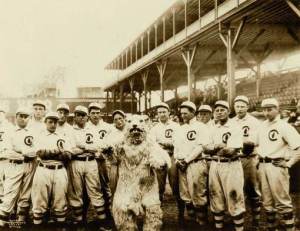 A few years later, they experimented with a live bear that is said to be Clark’s great grand father. (Ahem, Clark isn’t real.) Surprisingly, a live bear turned out to be a bad idea but a live goat could work.

Clark made his debut at a pediatric hospital but given his no pants status, he should have been introduced during the annual no-pants subway ride.

Time will tell how long Clark will be around and whether he’ll affect the Cubs’ performance.

But given what we know about the team’s history, I think it’s safe to say: dem Cubs, dey ain’t gonna win no more.

May the farce be with you!