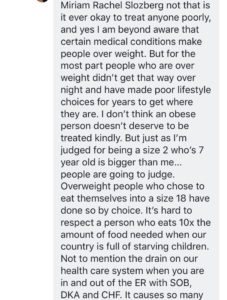 I have been following the Scary Mommy Facebook page for years as many articles that they share are quite thought-provoking. However, many are political which I am not going to be going into at all, not right now anyway. The article that I want to talk about is the one that is titled Thanks For Your Concern, But My Fat Ass Is Fine. This article is about how fat shamers online pretend to be concerned about the health of people that are overweight and obese. They make snide comments about their weight and act as if they are truly concerned while what they really are doing is shaming the individual for being overweight or obese.

Fat shaming is not a new thing by any means. This has been an issue that has been going on for years, and even underweight people are shamed for not having enough weight which is referred to as skinny shaming. Neither is right to do and this means body shaming has not gotten better over time. In fact, in many ways, it has gotten worse thanks to the internet.

I chimed in as I had commented on the article, and I talked about how my weight loss journey started as of last January. I have lost 60 lbs, and I am only 20 lbs away from my goal even though now it is slow. I had also mentioned as well that as of last September, I had noticed that people, in general, were kinder to me after I had lost 40 lbs. Customer service was more receptive, people held doors open for me, and strangers said hello as well. I was still 40 lbs overweight and that is when I learned that even if you are ‘acceptably overweight’ then you are ‘worthy of being nice to’, but they don’t want to know a thing from you if you are obese – which is so sad. And even while being ignored while I was at a higher weight, I was still fat shamed silently just by that alone. It took me a while to see that, but after encountering kinder treatment from others when I had lost a significant amount of weight, that is when I realized that sad fact.

You know the story of how I ended up becoming 80 lbs overweight. Severe and unmanaged clinical depression mixed with situational depression is a killer and caused me to just want to give up which is why I turned to food for comfort and I lost hope that anything would get better. I am sure my cortisol levels were through the roof which also adds weight. That is from extreme stress. However, once things were finally taken care of, 4 months later was when I was able to get my shit together and then I had gotten serious about starting this weight loss journey. Anyone with an ounce of empathy would understand that. But not this particular sanctimommy who basically told me that I had no excuse to be a fat slob even though she didn’t say it in those words as she decided to comment on my thread that was relevant to that article. Why not go and read the exchange between me and her and you will see why I had the need to blog about this: 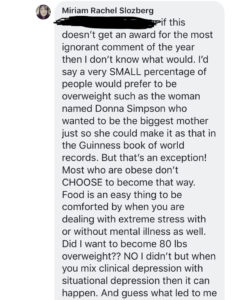 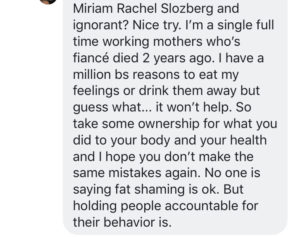 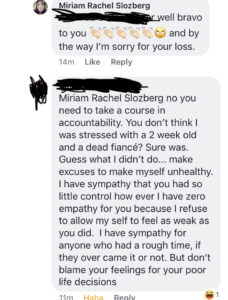 It didn’t matter to her that I was dealing with a serious mental illness, and it didn’t matter to her that I was beyond burned out. She still thought I was disgusting and out of control for not being accountable for my actions. And yes, there is the truth about being accountable, but if you are in such a dire state of mind, you really are not going to care. And if I was so out of control like she had put, then I would have found excuses to not lose weight at all even after things were resolved and the stress was lifted. Talk about one hell of a sanctimommy who has zero empathy and thinks that she is perfect since she was so ‘in control’ even after dealing with her hardship. Wow, ain’t she so perfect.

My guess would be that she would think that depression and mental illness are excuses too and would be the type to be beyond infuriated if one were to compare the seriousness of mental illness to cancer. People like her are toxic to those who are struggling with mental illness or who are struggling with anything in life that is putting a serious strain on their mental health. Fortunately, I have mine under control so I would not be vulnerable to her toxic ways, but I am quite angry that I had this encounter with someone who is quite damaging. However, I can deal with it and that is also what is fueling me to blog about this.

The fact of the matter is, I am more concerned about her encountering someone who is in a dire state of mind and doesn’t have their mental illness under control. I am worried about her encountering someone who is severely burned out like I was that is suffering badly from situational depression. I am scared that she could be the reason that someone who is suffering could potentially snap. So you sanctimommy, if you are reading this (which I wouldn’t be surprised since you were trolling my page anyway), I hope you don’t hurt anyone because that if you do, then you would be accountable for that! How does that sound?