Mental Illness Cannot be Spanked Away Despite what Some May Say 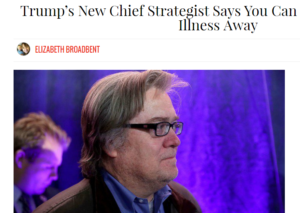 Ever since Trump was elected in the US, I wasn’t happy but knew it was best to let it go and hope for the best. What choice did we have anyway? However, the concerns that many who were against Trump had were certainly valid. Let’s just say that Trump’s new Chief Strategist Steve “Turn on the Hate” Bannon is giving people reason to worry.

An article recently written on Scary Mommy summed up the truth about this scary man. He is not only ignorant, but indeed frightening. We already know he is anti-Semitic, hates women (go click on the link and read up on what he says about women, it’s nauseating really), is racist and homophobic. Bannon is extremely right-winged and we know that sitting on either extreme screams out danger. This is why I will never leave my comfortable centre no matter what. He is loved by members of the KKK, and it should not come as a surprise that he has negative attitudes towards those who have mental illnesses.

In his twisted logic, he believes that those who have mental illnesses today were not spanked enough as children. Yeah that is right, he believes you can spank depression or any other mental illness out of your kids if you do that more. Wow, there are no words about that. Seriously?

We know that abuse of any kind will fuck anyone up. And he wasn’t referring to the odd light spank here and there on the rear end to get the message across. He was insinuating that constant spanking will wipe mental illness away! It does not take a rocket scientist to realize that abuse- whether it is physical, sexual, verbal or emotional can cause mental illness to manifest. It is pretty much guaranteed if you are genetically predisposed to mental illness anyway that you will end up with one at some point in life.

The worst thing that can happen to anyone, anywhere is to have someone spouting off hate like he does. Bannon, you are an asshole and an idiot who would never do his research on such topics. You should not be anywhere near the White House.